Tug is yet another fantastic way to reward a dog for a job well done. Many dogs are tug and play motivated, so we can alternate the use of food with a game of tug.

The first thing to do is to find a tug toy that is sacred, meaning your dog has not seen or interacted with this toy before. Keep it sacred! This toy is only going to be used for the purposes of tug. This will also help down the road as your dog will hopefully not generalise tug to your pant leg, the leash, the drapes, etc. 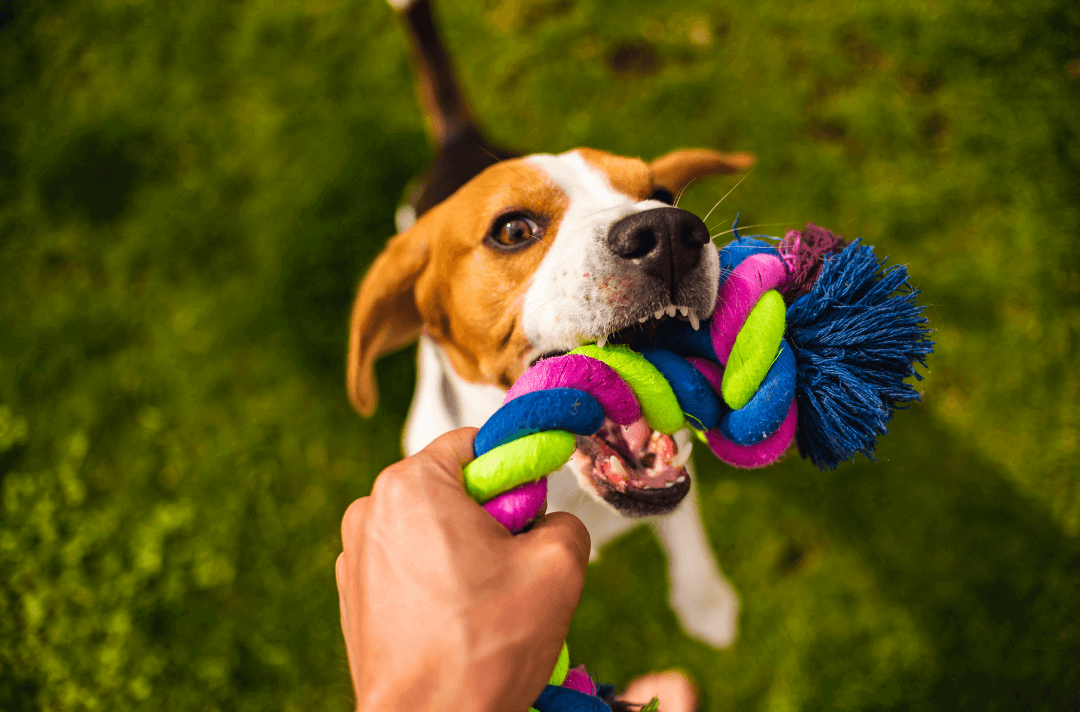 Now, let's build motivation. Bring out the toy and move it around, low to the ground and make like a squirrel's tail. Shake it and freeze for a second. Move it and shake it and freeze. Don't let them get it though - be faster than them! Get excited! Squirrels aren't boring - that's why your dog wants to chase them. After about 5-8 seconds, put it away and be boring. After about 15-30 seconds, lather, rinse, repeat! Do this until your dog is amped up and really wants that toy!

The next phase is going to be to let your dog get a little taste of it. Amp them up a bit and then at the last second let them get it and engage with them. Be surprised and excited that they were so clever and fast! Shake the toy gently, and pull back a little. Let them pull back on it too. After 5-8 seconds of this, you're going to fold up that toy in your fist as much as you can and say your cue to ask them to drop it. As soon as you say it, you have to stop. The squirrel is dead. Your arm goes limp but they don't get to keep the toy. Immediately drop 5-6 treats on the floor right beside their nose and scatter them around, pointing to all those pieces. You may have to hold the treats on your dog's nose for them to drop the tug toy and take the food. Whichever works best for your dog!

Tuck the tug toy away and go off and get on with your day.

When playing tug, you'll want to hide it behind your back, say your "get it" cue just once, then the tug comes out and is activated.

Over time, you let them play for a little longer and try it in different environments.

What if my dog gets really amped up with a game of tug and I can't settle them down? That's called over-arousal and we want to avoid it. Turn down the intensity in your game and also shorten the duration of play significantly. Take a break in between each tug for a training break - work on sit-stay, down-stay, some other impulse control based behaviours, and then take a real break from training AND tug. If that doesn't help, stop tug altogether and get in touch with us!

What if my dog grabs my hand or clothes when going for the tug? Ah, this is an instant penalty. You can say - "game over!" and then the tug goes away for a few minutes at least. (You may have to pay for a drop it to stop the game and put the toy away. That's okay - you're not reinforcing the bite.) You have to be consistent with this one or they won't learn to avoid biting your hand or clothes.

How often should my dog win? Well...it has to be fun. I like to let them win at least 80% of the time. If they feel like they can never win, they'll stop playing.

Caution: When playing tug with a young puppy who is still developing, a dog with dental issues, an older dog, or a dog with spine-related issues, you are simply holding on and letting them do all the tugging. Healthy, strong dogs can take a little more. There should not be any drastic direction changes and you should not lift your dog off the ground with this exercise! If you are unsure, speak with your vet before engaging in this game.